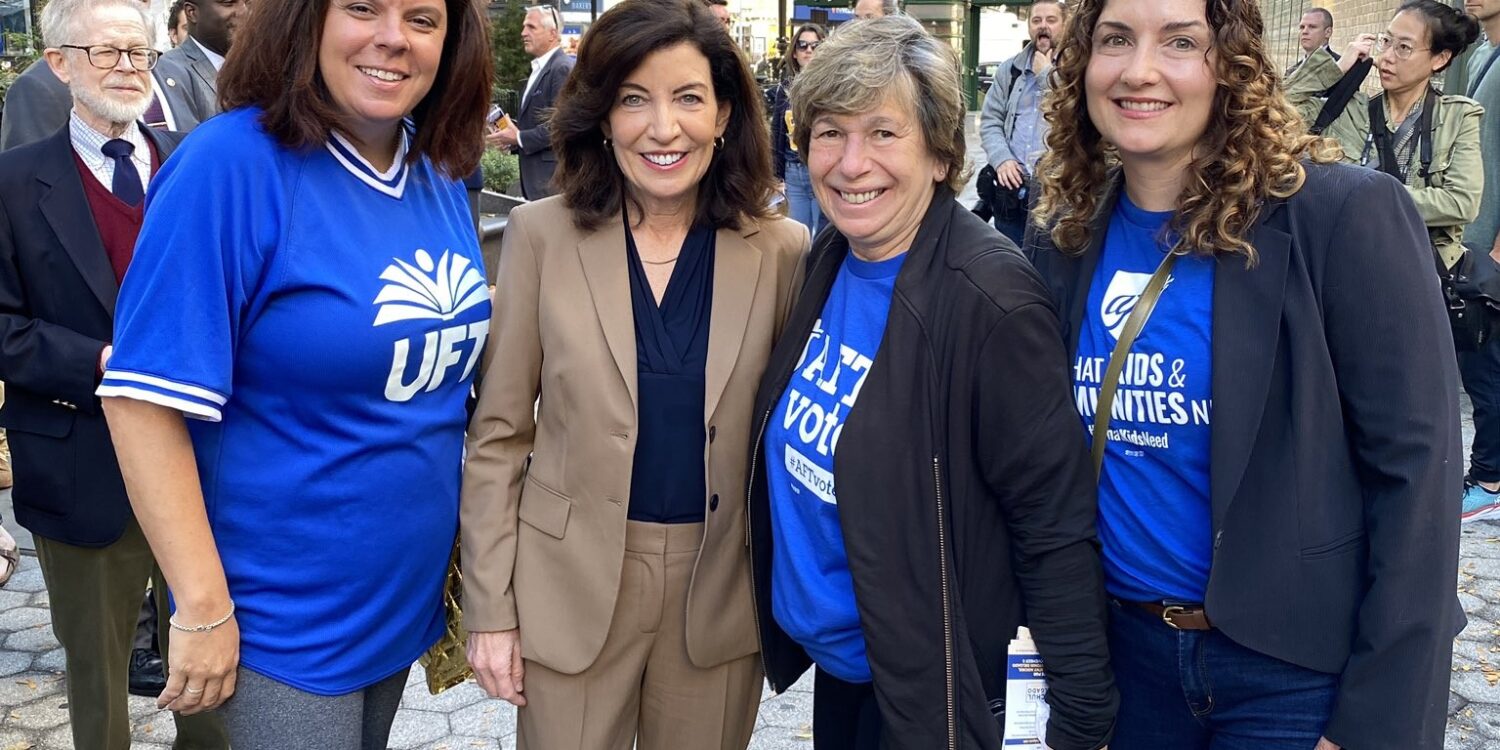 But They Get an ‘F’ in Serving the Needs of Parents, Schoolkids

Weeks after the 2022 elections, top teacher union bosses like Randi Weingarten of the American Federation of Teachers (AFT/AFL-CIO) and Becky Pringle of the National Education Association (NEA) were still basking in the glow of the reelection victories of some of their top gubernatorial allies.

They were, arguably, happiest of all about the win of rabidly pro-forced unionism New York Gov. Kathy Hochul (D), who had faced a fierce public backlash for her willingness, again and again, to side with Big Labor against the parents of school-aged children.

The fact that Ms. Hochul was able to stay in office despite the unpopularity of her actions does illustrate the extraordinary political clout government union kingpins wield because of their legal monopoly-bargaining privileges over millions of teachers and other public servants.

But November’s gubernatorial election results do not remotely show that union propagandists have succeeded in fooling the parents of K-12-aged children living in states where government schools are Big Labor-dominated that those schools are doing a good job.

Instead, union bosses have helped politicians like Kathy Hochul deflect the blame for the sad state of government education away from themselves.

Of course, the more parents are swayed to believe there is no political solution to the poor public education opportunities available for their children where they live, the greater the impetus for them to move with their families to states where government union monopolists are less powerful.

And U.S. Census Bureau data show that is exactly what is happening in New York and many of the other states where the vast majority of teachers and other government school employees are subject to union monopoly-bargaining control.

In the aggregate, just over 58% of government employees were unionized in the third of states (counting Washington, D.C. as a “state”) with the highest union monopoly-bargaining density in 2020.

By comparison, just 30% and 17% of government employees were unionized in the middle and lowest tiers, respectively.

“For many years, Census data show, parents of schoolkids have been voting with their feet in vast numbers against government-union-dominated states, resulting in an annual decline of roughly 140,000 from 2010 to 2020.

“From 2020 to 2021, the trend of parental ‘foot voting’ against monopolistic unionism got even stronger.

“New York alone endured an annual decline of 51,000, or 1.7%, of its K-12 school-aged population, putting the Empire State on track to see its primary and secondary school enrollment shrink by roughly 20% during the 2020s!”

“Parents obviously care more about their kids’ future than anyone else does. And school enrollment data for the 2021-22 and 2022-23 academic years show they continue to be deeply concerned about the substantial negative impact Big Labor control over education has on academic achievement and students’ well-being generally.

“Teacher union bosses could try to ameliorate parental dissatisfaction by agreeing to education reforms that would surely improve educational outcomes by rewarding teachers based on their unique skills and efforts.

“Instead, Randi Weingarten, Becky Pringle, and their cohorts are doubling down on politics as their means of perpetuating the dismal status quo in American education.

“While the final numbers are not in yet, it is already safe to say the hierarchies of the two national teacher unions spent additional hundreds of millions of dollars in 2021-22 on electioneering, lobbying, and contributions to other ideological groups.

“Fortunately, in Right to Work states like Florida and Georgia, where the share of educators and other public servants who are subject to Big Labor monopoly control is relatively modest, teacher union bosses still do not control all the political shots.

“But for the time being it seems many fed-up parents in New York will continue to believe their least-bad option for their kids is to take them out of state!”

To take action by supporting us and fueling the fight against Forced Unionism, click here to donate now.

Home » NEWS ARCHIVES » Teacher Union Dons Get an ‘A’ in Electioneering