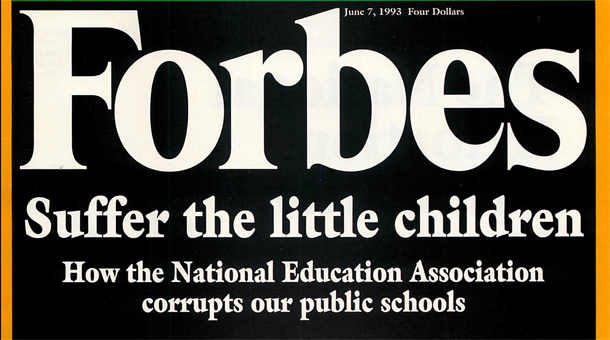 KEITH GEIGER’S STYLE may be more polished now than in his salad days as president of the NEA’s Michigan Education Association affiliate, when he astonished Walsh College economics professor Harry C. Veryser by gesticulating obscenely at him during an in-studio radio debate. “He flipped me the finger when school choice came up,” remembers Veryser, who jokes that the union’s ruthless and insatiable drive for power and perquisites should earn it a new name: the National Extortion Association.

The public may be only dimly aware of it, but the union’s growing power has exactly coincided with the dismal spectacle of rising spending on education producing deteriorating results (sec chart).

The rise of teacher unions has coincided with cost and quality deterioration in the nation’s public schools. Whether correlation means cause is, of course, disputed. What cannot be disputed is that the union wields increasing control over management ofthe public schools. “The unions are most successful at getting control of the curriculum,” says University of Chicago economist Sam Peltzman, who has conducted elaborate econometric studies of the impact ofunionization. “My basic finding,” he says, “is that where the unions get a toehold, performance ultimately deteriorates—sometimes after as much as a decade.”

A FORBES inspection [of NEA] refines the general view in several ways:

Far more than other unions, the NEA saturates most of the nation. Its power is felt almost everywhere. It has 52 state-level affiliates and some 13,000 local-level affiliates. In each community these may appear autonomous. But in fact the NEA plays a powerful centralizing role. “Keith [Geiger] personally contacts all local presidents who are on strike,” says Beverly Wolkow, hired by Geiger to her current position of Michigan Education Association (MEA) executive director in 1981. And, unusually for a labor union, the organization divides authority between quickly rotated elected teachers and school employees, such as the presidents, and permanent professional staff, such as executive directors, who critics say tend to control it.

Any teacher joining a local education association, the level at which salaries are mostly bargained, also involuntarily joins a state affiliate and the national organization, which together consume most of the strikingly high membership dues. Imposing a single “unified dues” payment, thus extracting that state and national tribute automatically, was top priority for the 1960s union builders.

Regardless of its needs, NEA dues are a fixed proportion of the average teacher’s salary. Thus, just as real estate agents have a vested interest in rising property prices, so does the NEA have a direct institutional interest in teacher salary increases.

The NEA’s centralizing power is further enhanced by its effective control of the about 1,500 “UniServ” professionals, at least one in every congressional district. Their official function: to assist locals with collective bargaining. But they also constitute what has been called the largest field army of paid political organizers and lobbyists in the U.S., dwarfing the forces of the Republican and Democrat national committees combined.

In theory the NEA has internal democracy. But in practice it is firmly controlled by its leadership … Which, after all, would explain a celebrated NEA conundrum: how the union can be so left-wing when its own figures show that a third of its members are Republicans and well over 40% voted for Ronald Reagan—and, in 1988, for George Bush.

The nastier side of labor unions, particularly Michigan

labor unions, is usually ignored. But the Springfield, Va.- based National Right to Work Committee, the leading opponent of union power, is happy to provide a thick file of local newspaper clippings on teacher union harassment, vandalism and violence.

But for retired Swartz Creek teacher Kay Jackson, who didn’t want to join any union, it was anything but casual. It meant over a decade of litigation and ostracism … she believes, dead cats thrown at her house and the murder of her pet German shepherd. Talking to Forbes at the age of 78, some 24 years after it all began, she bursts into tears at the memory.

… the teachers union is in an exceptional position: the near-monopoly supplier to a government-enforced monopoly consumer. In effect, it has been awarded the equivalent of a cable TV franchise—without any of the countervailing regulation.

Precisely because of the obvious potential for abuse, even labor union advocates like AFL-CIO President George Meany and Franklin D. Roosevelt viewed unionization of the public sector as unthinkable. But this abruptly changed in the 1960s.

Unlike federal government unions, teachers unions are not subject to Hatch Act restrictions on political activity. Again, there are state restrictions. But they don’t prevent classroom atrocities:   Washington Post has editorialized three times recently against teachers refusing to write college recommendations unless the students and their families supported aspects of the union’s agenda.

Without its legal privileges, the NEA’s power melts away. In Texas, a right-to-work state where teachers cannot be forced to join the NEA, the imposition of unified dues caused many eventually to leave for Association of Texas Professional Educators, a genuine professional association that is now about as large. And Supreme Court rulings have resulted in bitter litigation over the proportion of dues devoted to collective bargaining rather than to partisan politics and other activities—the “fair share” nonmembers in agency-shop states must pay. Horrifying precedent for the NEA: The “fair share” determined in the [National Right To Work] case of the Communications Workers of America was just 21%.

The NEA is not only a monopoly: It also endeavors to be a monopsony—a monopoly of buyers. Like the American Association of Retired Persons (Forbes, Feb. 22, 1988), it is a political lobby that quietly profits from marketing insurance to its members. But the teachers union can sometimes suppress competition.

Federal government filings show that the NEA has been receiving about $10 million a year, 30% of the premium members pay for NEA-marketed Prudential life insurance. This is, in effect, the NEA’s very high rake-off for handling life insurance, through a complex arrangement, for its trusting members. Additionally, the NEA gets to keep part of the float. (Other services to members also bring the NEA a further $20-million-plus a year. The NEA nonprofit subsidiary involved in all this has built up net assets exceeding $65 million.)

FORBES tried to talk to Prudential about its NEA relationship. But it never got back to us.  … insurance company is very sensitive to labor union concerns. The National Right to Work Committee says that during the construction of its new headquarters, Prudential, the financier, removed its name from the work-in-progress sign—apparently because of union protests.

Then there’s the NEA’s intriguing relationship with Horace Mann Educators Corp., a property,casualty, and life insurer founded in 1945 and named after a patron saint of public education, which specializes in marketing to educators.

The NEA is a political science textbook case: It exemplifies the so-called iron law of oligarchy, the tendency of membership organizations to degenerate from democracies into elite-driven groups serving the interests of their leaders. Indeed, one of the most powerful NEA leaders has never been a classroom teacher at all: longtime general counsel Robert Chanin, who has been generously allowed to go off staff to work from a major labor law firm and won’t reveal his income.

Myron Lieberman is summarizing his public education career in a forthcoming book, Public Education: An Autopsy (Harvard University Press). It is a classic and unanswerable application of economic concepts to education. And it concludes:

“The promarket forces have one ineradicable advantage in the years ahead. That advantage is the inherent futility of conventional school reform.”

Which, after all, is why the NEA’s Bill Clinton—like 22% of NEA teachers, twice the national average—chooses to put his child in a private school.