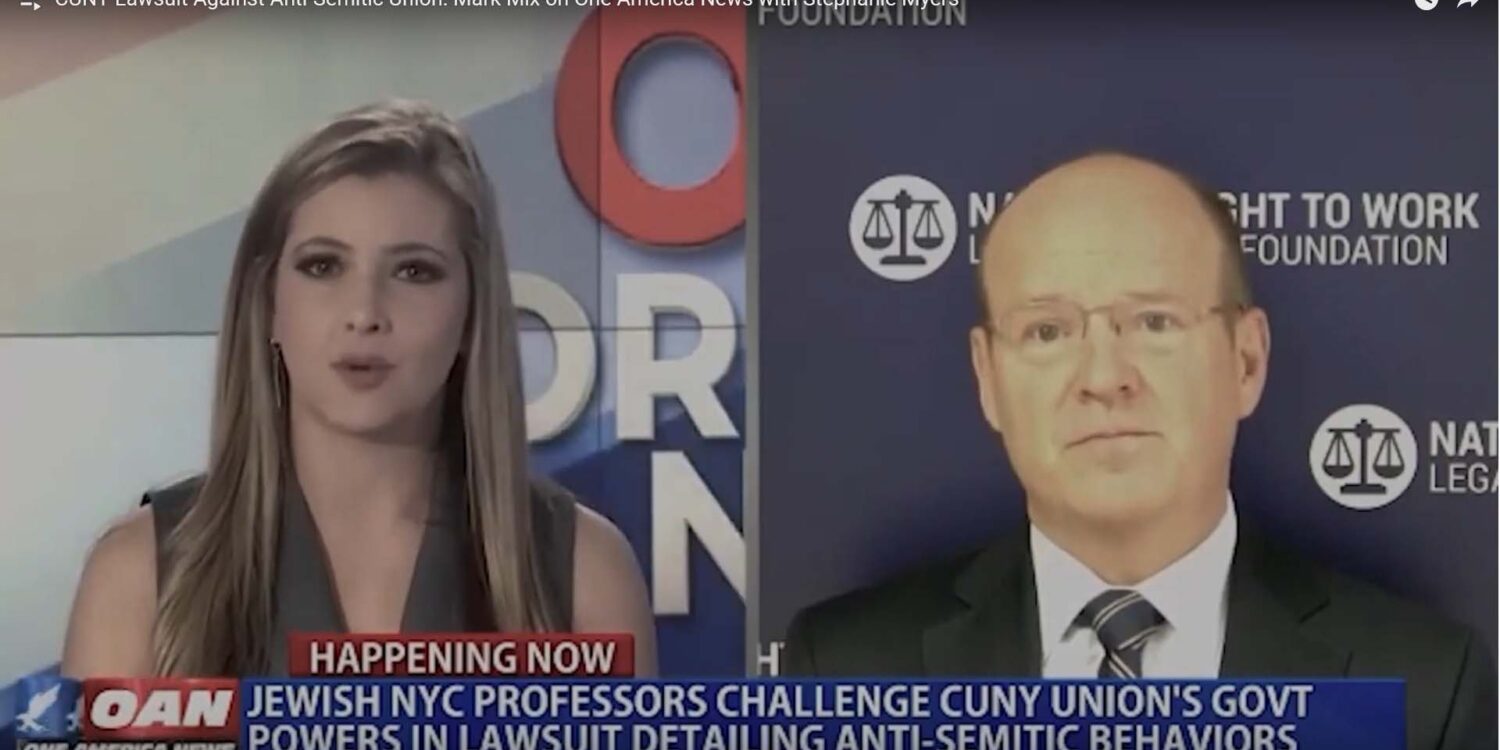 As a Jew and an ardent Zionist, City University of New York (CUNY) staff member Michael Goldstein reasonably believes there is no place for him in the American Federation of Teachers (AFT)-affiliated Professional Staff Congress (PSC) union.

In his professional life as a higher education officer and adjunct professor, Mr. Goldstein reports that he has been subjected to anti-Semitic and anti-Zionist attacks from PSC union militants.

These include “destruction of property,” “calls for him to be fired,” and “threats against him and his family.” He now has a guard follow him around everywhere he goes on campus.

Under the circumstances, it’s very understandable that Mr. Goldstein would not want to be a PSC member, and he isn’t.

Nevertheless, under New York State law, he is barred from dealing directly with CUNY. Instead, he must allow PSC union bosses who evidently loathe him to speak for him on all matters concerning his pay, benefits, and work rules!

In a recent op-ed for the Journal News, a newspaper serving New York’s Lower Hudson Valley, National Right to Work Committee President Mark Mix decried the injustice being perpetrated against Mr. Goldstein and many of his colleagues as a consequence of the Empire State’s pro-union monopoly labor laws.

As part of a “sustained campaign” against Mr. Goldstein, wrote Mr. Mix, “vandals defaced a photo” of the adjunct professor’s late father (who once served as CUNY’s acting chancellor) located outside his office with “anti-Semitic graffiti.”

Another Jewish professor targeted by CUNY radicals is Jeffrey Lax, the head of Mr. Goldstein’s department.

On the day of a “college council meeting about the rising tensions on campus,” nails were inserted into the tires of Dr. Lax’s car.

Since, during public debates over the merits of Big Labor special privileges, union bosses often congratulate themselves for supposedly defending the workplace interests of union non-members as well as members, one might have expected at least tepid condemnations of these campus attacks from PSC officials.

Instead, noted Mr. Mix, the PSC union hierarchy publicly sided with the vandals over faculty members they allegedly “represent.”

The monopoly-bargaining system, authorized and promoted by government policy, forces professors “to associate with an organization that has a verified track record of acting against their interests,” concluded Mr. Mix.

In January, two staff attorneys for the Committee’s sister organization, the National Right to Work Legal Defense Foundation, along with attorneys for the Harrisburg, Pa.-based Fairness Center, filed a federal civil suit on behalf of Mr. Goldstein, Dr. Lax, and four other CUNY professors.

The suit charges that New York’s Taylor Act, the statute that empowers PSC and other government union bosses to foist their monopoly “representation” on members and non-members alike, violates the First and Fourteenth Amendments to the U.S. Constitution.

To start with, several Taylor Act provisions are helping PSC union bosses circumvent the U.S. Supreme Court’s 2018 Janus decision, a Foundation-won case that bars the extraction of forced union dues or fees from public employees as a job condition. Despite Janus, three CUNY plaintiffs who have resigned from the PSC are still being forced to bankroll it today.

As it proceeds through the courts, the CUNY case will test whether or not such substantial restrictions of rights are constitutionally permissible.

Meanwhile, the Committee is continuing to help mobilize support for legislative efforts to eliminate or curtail significantly the scope of Big Labor monopoly privileges through its mail, email, and telecommunications activities.

“The National Right to Work Committee’s position has consistently been that barring all forms of government-sector bargaining is the ideal means to level the playing field for taxpayers and independent-minded employees,” said Mr. Mix.

“Both Right to Work litigation and legislative lobbying efforts have ample potential to move policies governing local, state, and federal workplaces in the correct direction.”

This article was originally published in the National Right to Work Committee monthly newsletter.